What is a Good Churn Rate for SaaS Companies? Calculation and Benchmarks

Your SaaS churn rate depends on varying internal and industry-related factors. How do you determine these rates? Here are metrics and benchmarks to guide you.

Churns can be a major problem for any SaaS company. However, you cannot completely prevent SaaS churns. Some clients will always leave regardless.

This raises the question — what are the acceptable SaaS churn rates for companies?

There’s no easy way to respond to this question as SaaS churn rates are calculated differently, and they impact companies differently.

The bottom line for any SaaS company is to be able to calculate their subscription metrics and gauge them against industry benchmarks. This way, they’ll know if they’re within the “good-churn” spectrum.

This post discusses these calculations as well as some common industry benchmarks every SaaS business should consider.

What are SaaS Churn Rates?

The SaaS churn rate is a figure that shows you the percentage of customers who are canceling their subscriptions within the set period.

Most SaaS companies depend on recurring revenue from their users. Therefore, tracking churn metrics is vital as a higher churn rate could mean depleting revenues.

Calculating SaaS churn rates doesn’t merely stop at determining the number of canceled subscriptions. There are more nuanced details to factor in such as revenue, upgrades, downgrades, expired renewals, etc.

Here are the specifics on how you can calculate SaaS churn rates.

SaaS companies focus on these churn metrics to determine their performance.

This refers to the revenue lost over a given period as a result of canceled subscriptions.

Here’s how you calculate revenue churn: Take the total revenue lost in a period and divide that by total revenue at the beginning of the period. Multiply that by 100 and you have your rate.

This is why, for a more nuanced result, you can calculate the net revenue churn.

Also referred to as logo churn rate, this metric tracks how many customers cancel or fail to renew their subscriptions.

Net customer churn rate, however, is more detailed as it factors in new customers gained along the way.

Saas churn rates can also be tracked by period to understand your short-term and long-term performance.

Monthly revenue churn is calculated by taking the total MRR churn and subtracting expanded MRR from it. The result is then divided by the total MRR at the beginning of the month and multiplied by 100.

Here, you take the total annual revenue, then subtract expanded revenue divided by ARR at the beginning of the year. Then multiplied by 100 to get the percentage.

Let’s now take a look at the churn benchmarks your SaaS organization can reference.

Different companies recommend varying SaaS churn rates as acceptable. But they all depend on many other factors and there’s no one-size-fits-all policy.

A survey found the median churn rate by annual revenue to be 12.6% for businesses with ARR greater than $5 million.

Here’s the graphical representation of these results: 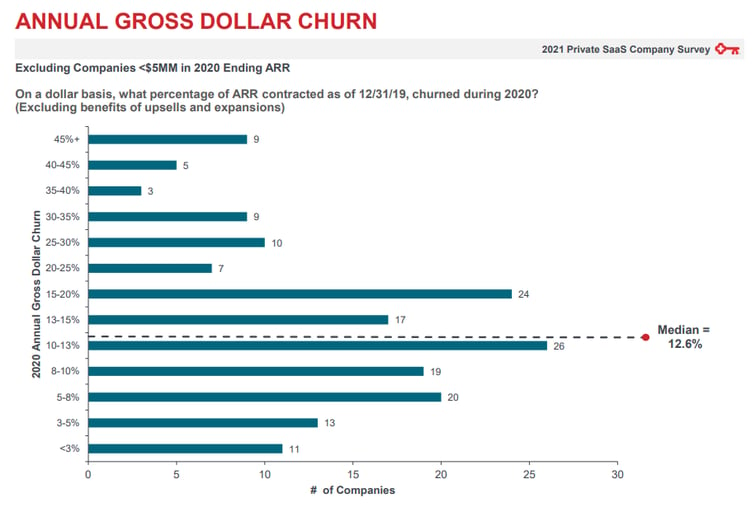 The average annual customer churn rate in the same survey was 13% as below. 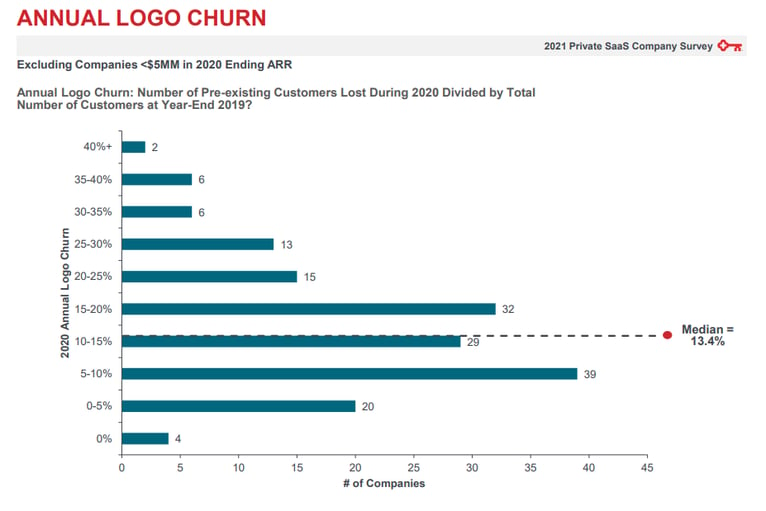 The survey was conducted among over 350 SaaS private companies across the US, Canada, and Europe. This shows a large enough sample space to prove the relevance of the statistics found. You can use these as benchmarks for your churn rate too.

For small SaaS companies and startups, the churn rates may be different.

Baremetrics pulls statistics from different SaaS startup companies using their software and analyzes them in real-time. In their Open Benchmark section, there’s data grouped by average revenue per user, across over 800 SaaS startups.

From the group analysis, you can tell the monthly user churn and revenue churn given the median monthly recurring revenue. Here’s what that looks like: 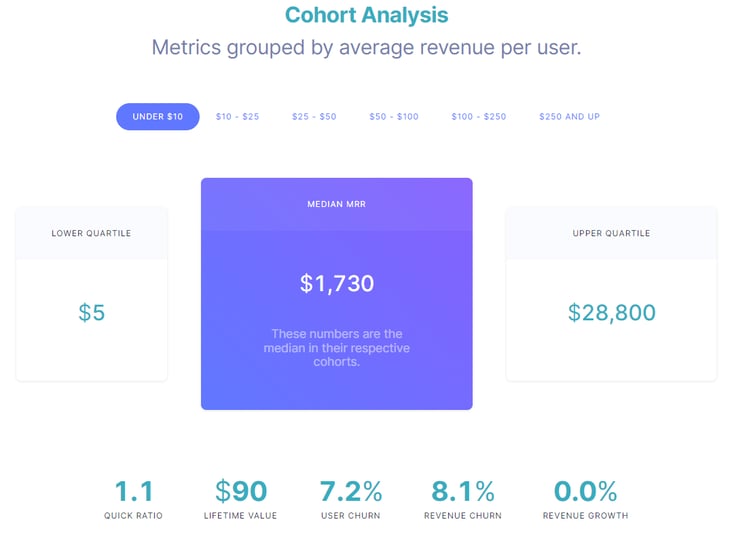 The average monthly user churn rates from different levels of revenue range between 5% and 7%. The monthly revenue churn on the other hand ranges from 6% to 8% for most startups according to these statistics.

Here’s a look at Convertkit’s metrics.

This is based on a monthly recurring revenue of $2.49M.

The rates are notably higher and much closer to the startup company range than those of established brands.

There’s no ideal churn rate since it depends on whether it’s calculated based on customers or revenue lost. However, a rate between 5% and 7% annually can be considered good if you’re basing your calculations on customers.

How accurate is this benchmark? More so, how achievable is this rate for large vs startup SaaS companies?

However, a 5% SaaS churn rate in a month or more isn’t so good. This would translate to an annual churn rate of 46% if you factor in expansions.

It’s a high churn rate. Having that kind of loss in customers or revenue per month can only have adverse effects on your business.

But how realistic is it to achieve this supposed “ideal” churn rate?

This will depend on different variables, both internal and external. Here’s a look at them.

As seen in the KBCM survey discussed earlier, the annual median churn rates for the companies were 12-13%. These are companies with high revenue above $5M.

Why the disparity, you may ask?

Large companies have these advantages over their smaller counterparts. 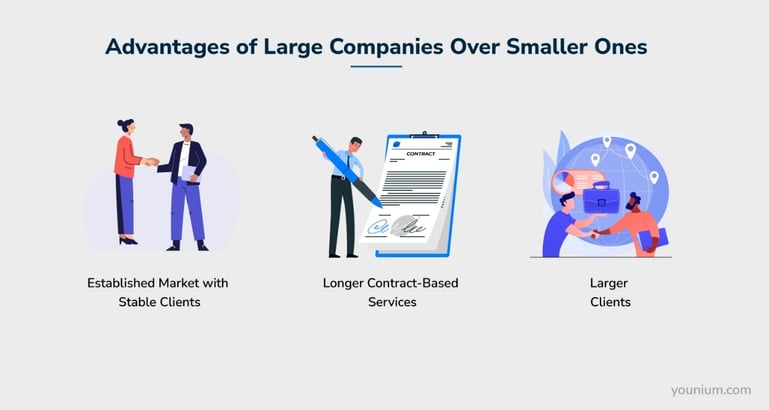 That said, larger businesses are more likely to stay within the 5% to 7% churn rate range. It’s a lot harder for smaller businesses and startups as they’re only starting to build their brand.

Establishing loyalty with their customer base takes time. So does landing high-value enterprises. Similarly, they issue shorter subscription plans which increase the likelihood of churn.

For SaaS companies, different software solutions have varying levels of churn. Depending on their usability, some software will be deemed more essential compared to others.

For instance, having a subscription billing software may be deemed more integral to a SaaS business than a website designing software solution.

Therefore, such integral SaaS software will have lower churn rates.

Your company’s placement in the market also matters in this sense. When starting out, you’re still trying to find the right market fit for your product. Your churn rates may be high at this point.

As your business grows, you make better marketing decisions and your churn rate begins to lower.

Your SaaS churn rates also depend on whether or not the client intended to cancel or downgrade.

Either churn rates have different causes and can be mitigated differently.

Involuntary churn rates typically have to do with failed payments or missed deadlines for contract renewals.

Reducing involuntary churn is sometimes within a business’s control as these customers don’t necessarily want to leave you. For instance, in a situation where the contract renewal is delayed by a few days or weeks, you could still get your customer back.

Voluntary churns, on the contrary, can be due to a myriad of reasons, some of which may not be in your control. 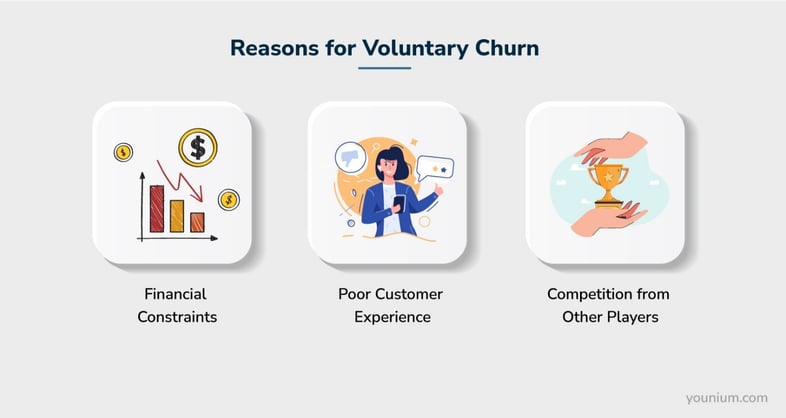 To prevent future churn, you could consider improving your marketing efforts by conducting market research to ensure that you’re reaching the right target audience. Also, you should channel more efforts towards improving customer experience.

This way, you’ll be well-positioned to improve your services and retain your client base.

Why is it Hard to Find Accurate Churn Rate Benchmarks?

Now, you might be wondering why it’s difficult to find the right benchmarks for churn rate. Here’s why. 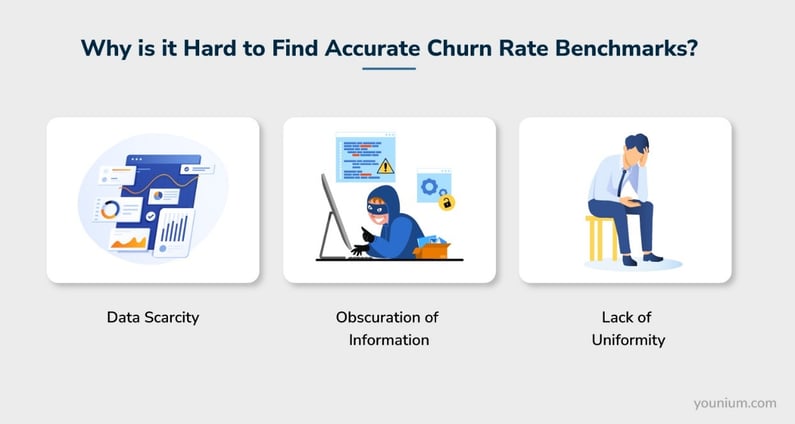 1. What is the average churn for SaaS companies

2. How do you calculate churn for SaaS businesses?

There are four major metrics to calculate churn for your SaaS business. These include.

3. What is a good churn rate for a startup?

Startups have higher churn rates at the beginning, ranging from 6% to 8% monthly, which is roughly 46% annually. This is a normal churn rate for startups as they establish their product/market fit.

With time, the churn rate should get lower. A good benchmark would be 10% to 15% annually as the company grows both their product and market.

Eventually, as it establishes in the market, a 5% to 7% rate would be an even better benchmark.

4. What is a good customer retention rate?

A customer retention rate of 90% is considered good for small businesses. However, you should strive for a rate greater than 100%.

5. What is acceptable churn for SaaS?

Lower Your Churn and Increase Retention

There may not be a single good SaaS churn rate. But whatever your rates are, you can always lower them. In the end, your recurring revenue depends on your customer retention, a part of which involves reducing churn.

With larger or more established SaaS companies, it’s clear where your range is within 5%-7%. This is an achievable rate to work towards to continue growing.

Conversely, for smaller businesses and those just starting out, a 5%-7% monthly rate may be bad but it’s common.

To monitor your churn rates, you could leverage Younium’s subscription management platform. It will give you access to your subscription analytics that will help you gather insights on how you can minimize your churn rate and scale your recurring revenue. So, get your free demo now.