Within B2B SaaS, recurring fees are the most common charge types for a service subscription, for example, a flat monthly fee of 1000 EUR.  In other articles, Subscription Metrics Intro and MRR vs CMRR, we covered a couple of subscription metrics generated from recurring subscription fees. However, one type of fee that is also common but a bit trickier to measure in terms of subscription KPIs is the usage-based fee.

This type of fee is variable (and may fluctuate heavily) and based on the consumption of a certain unit of measure (we usually measure per month). The pricing of usage-based fees can be per unit, but can also have tiered-based pricing with changing unit prices over different interval tiers. Another variant is to have flat prices per tier.

How to approach these kinds of fees is to let a month pass to know the actual usage amount during that month and then invoice the customer for the consumed units according to the pricing.

In this scenario, we can only assume that we will get our 1000 EUR per month, and that is what our metrics tell us in the form of CMRR and MRR. However, if we are quite sure that this customer will send about 2000 emails per month, don’t we want to measure and forecast this additional revenue as well? Shouldn’t the CMRR and MRR be 1100 EUR then? (0,1 * 1000 = 100 for the additional emails above 1000)

EMRR is a booking metric that is basically CMRR + Forecasted MRR (FMRR) from a usage estimation. Usage MRR is a subscription metric for a specific month and will either be the actual revenue from the usage that month if the month has passed, or the revenue from the most recent past month for future months.

The first effective month of the subscription passes, January, and it turns out that our customer sent 2500 emails during January, so we charged them 1150 EUR for that month. February also passes, and the customer used 2200 emails, paying 1110 EUR. We will then have a total MRR (regular MRR + usage MRR) of 1150 EUR for January, 1110 EUR for February, and forecast the total MRR for future months to 1110 EUR.

We can always change the EMRR in the future according to historical data to make it more accurate. But our Usage MRR will always be updated for future forecasts with the usage from the latest month.

So, EMRR and Usage MRR are metrics that help us include usage in our recurring revenue KPIs if we’d like to, by using our standard CMRR and MRR metrics and doing some additional estimating and forecasting of usage. These metrics can be very valuable for companies with usage-based products that make sense to price according to customers' actual consumption. 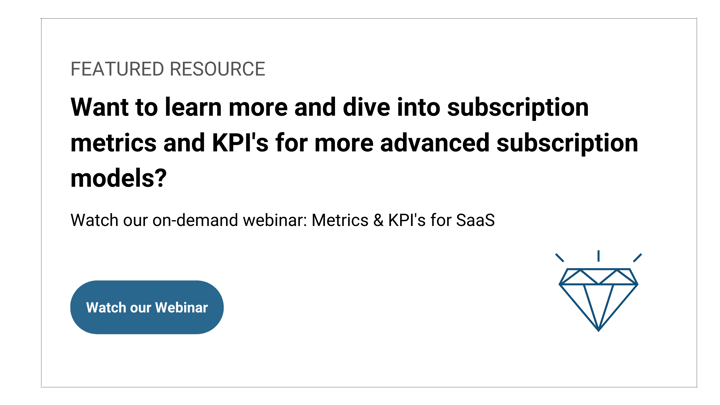